When we descended the stairs of a cliff to reach this turquoise beach visible in the distance, my nut-brown eyes first quickly scanned through the different colors that had spread themselves onto the landscape, and then they insisted on exploring each hue for prolonged periods of time and stopped listening to me.

White cottony clouds floated in a light-blue sky, which gave way to a deep-blue sea, whose green waves rolled towards us, and then they washed over the brown moss to run into the fluorescent-green corals and mix with the ink-blue pools in which black and golden stripped tiny fishes darted to and fro from one rock to another. 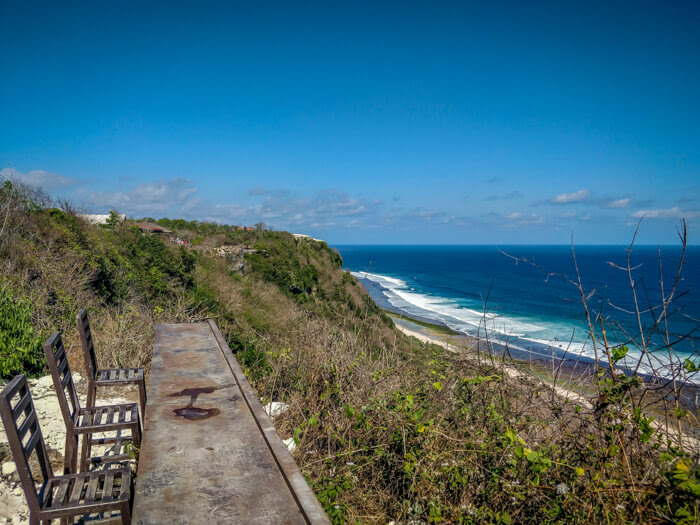 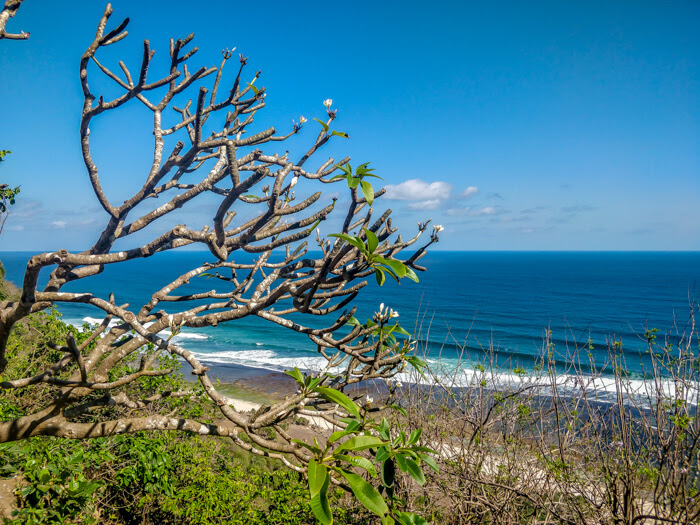 I was in awe first, then ecstatic, then sort of zen came over, or you can also call it the exertion of having driven for 2.5 hours while the sun shone right on the top of our heads. Yes, that is how far the beach is from Ubud center, where we were staying at the moment.

While in awe, I gaped at the landscape. When I was ecstatic, I jumped around and took pictures. When zen enveloped me, we sat at the wooden bench of an abandoned but a decorated cafe (with windchimes, beer cans, old slippers, cow skull, seashell decorations) and enjoyed our picnic of a multi-grain baguette with ricotta cheese and tomatoes and bananas.

Related Read: Everything you need to know about the On Arrival Visa for Indonesia 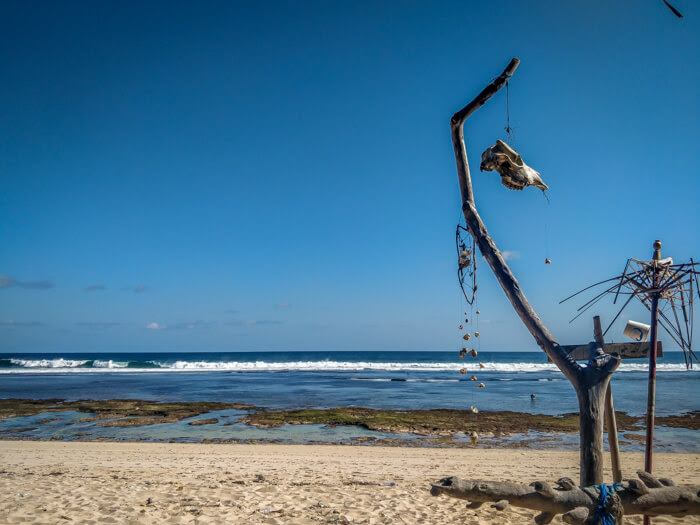 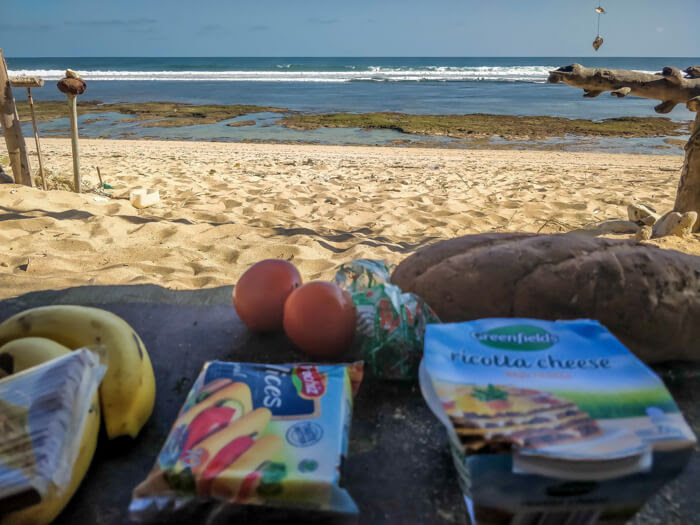 And then as the food reached my stomach, a playful child suddenly stood up and ran towards the sea. Like on a summer day in India, when the whole family is asleep in front of water coolers, the child, after having enjoyed his curry and roti with mango “aam panna”, plays around, opens all the water taps in the house and stands under them, fills all kitchen spoons and glasses with water, runs bare feet on the boiling floor, and vehemently nods his head when his mother asks him to join her on the sleeping mat on the cold floor.

I was that child. I took off my clothes, changed into my sea-blue bikini behind a tree, and ran into one of those coral pools. And as the water washed over my scorching skin, those childhood days played in my mind like a movie.

Also Read: Traveling India – Stories from growing up and years of traveling in India 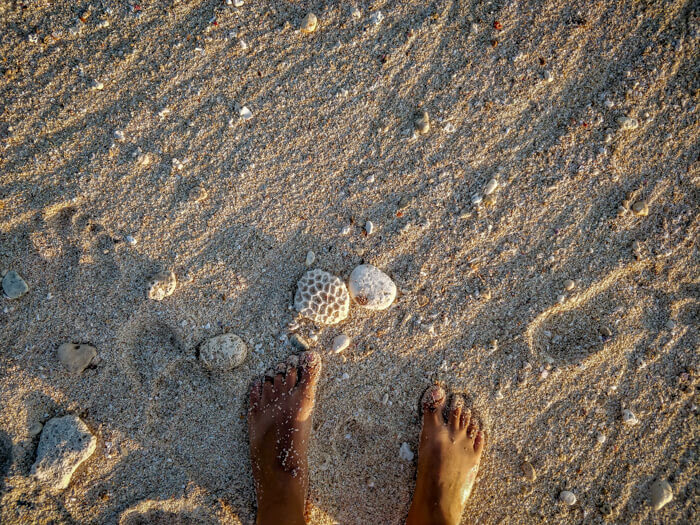 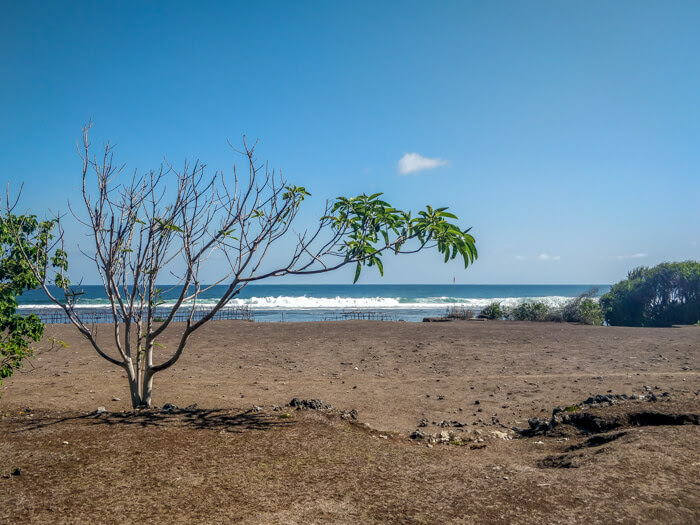 I let my feet go loose and floated in the mild water. I spent the next hour listening to the sea and watching the grey clouds hung above the patient ocean.

The sea was calm, and the sun reflected off the carelessly strewn around purple, blue, and green shells artistically. A blue kingfisher decided to perch herself on the sand, near us, and then we watched the sea together. And then she took a low flight, giving me plenty of chances to click her, but my phone was far away in the cafe. Well, that moment would only be mine now.

I could hear nothing apart from my friends’ chuckles and the sound of the soft waves rolling into the shore. I could see nothing apart from the Indian ocean, the yellow sand, and the cliff that fringed them from the side. And in those moments, I was oblivious of the chaotic world that existed away from those calm coral pools and of the harshness that is nothing like the soft sand on which ants crawled away with tiny shells. 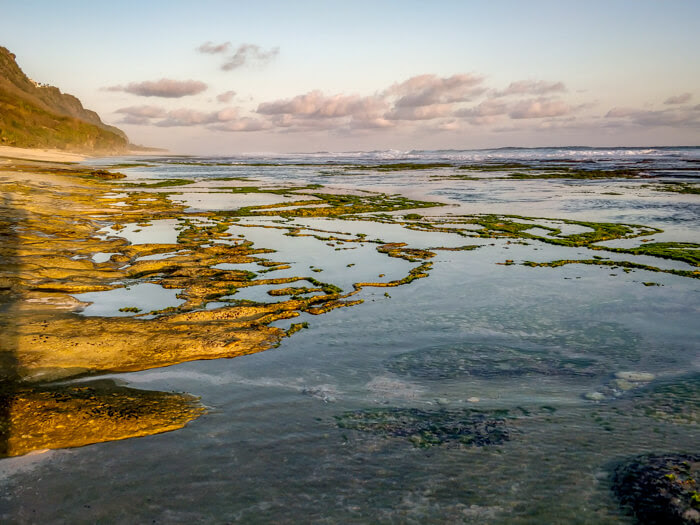 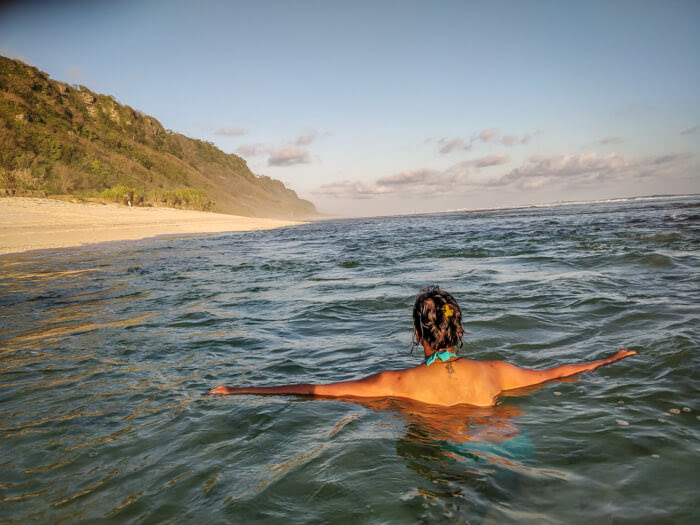 Apart from us, two fisherwomen and a few men who were searching for shells were the only people on the beach. And when I looked above from my personal coral pool, people watched from the cliff above us, but most of them didn’t come down until sunset.

Oh, yes. The molten, golden sunset. In this island beach sunset, we not only felt the sphericalness of the sun, but we also realized that we were on the edge of the earth, and the universe seemed much more real.

The sun was first red, then orange, and then it turned yellow, like a ripe mango. And then it was gone, leaving orange hues behind it. 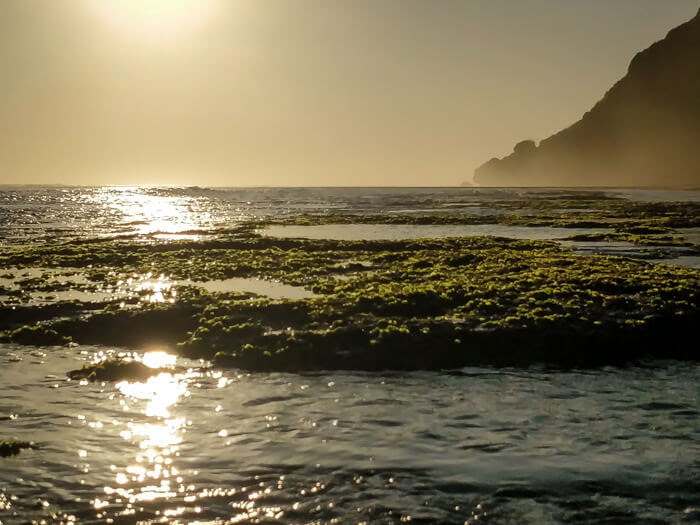 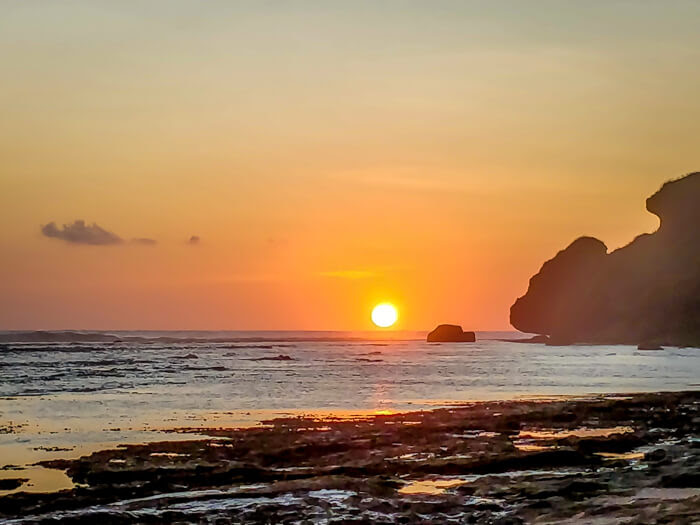 It was when the sun left that we thought of leaving that solitary heaven. And then as we walked back to our bike, we found ourselves standing in between two cliffs, while millions of stars watched us from above.

Between those two cliffs, we could only hear the ocean and the silence, only see the stars and the darkness, only smell the humidity and the desertedness, and only taste the salt and the stillness. And then I switched off the flashlight of the phone.

Then it was just us under the starlit sky, and the moon was making the ocean roar. Also, people were sitting around a campfire, barbequing fish over it, drinking some Bali beer, and preparing for a good night, next to a friendly ocean. So if you are into camping, please ask around, and I am sure you can just rent some camping gear and go.

We drove back 2.5 hours again to reach Ubud while stopping on our way for some mushroom curry with rice and iced coffee while discussing that Nyang Nyang beach was one of the best places to visit in Bali. 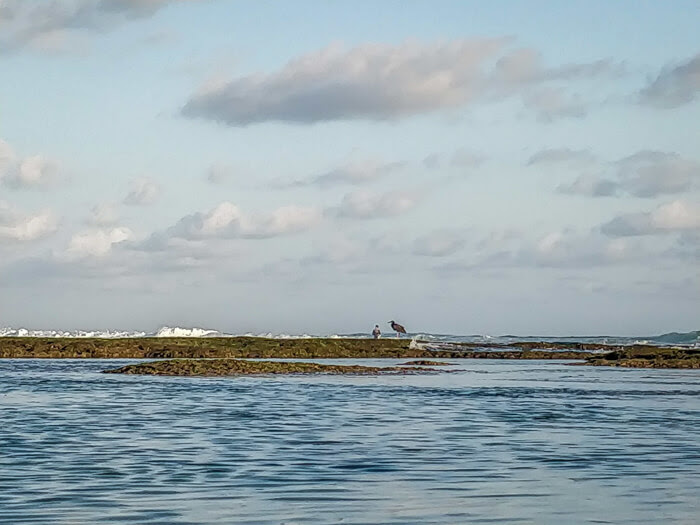 The drive to this beach is long but fun, though some roads were very crowded. You can also hire a car or a bike taxi and reach this place. GoJek and Grab are popular taxi players in Indonesia. Take food and plenty of water and swimsuits. The beach also has some cafes and fancy restaurants on the main road, but we didn’t stop at any. Some people say that the walk to the beach is pretty tough and you can’t find it, but I think that was the other end of the beach. We followed Google maps, parked our scooters when the beach arrived and walked down a long flight of stairs to reach the beach. Though the effort was worth it, for this beach is one of the best places to visit in Bali. 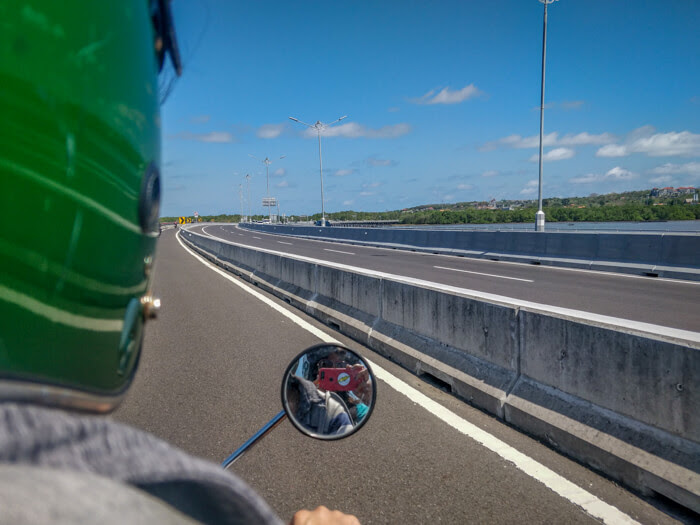 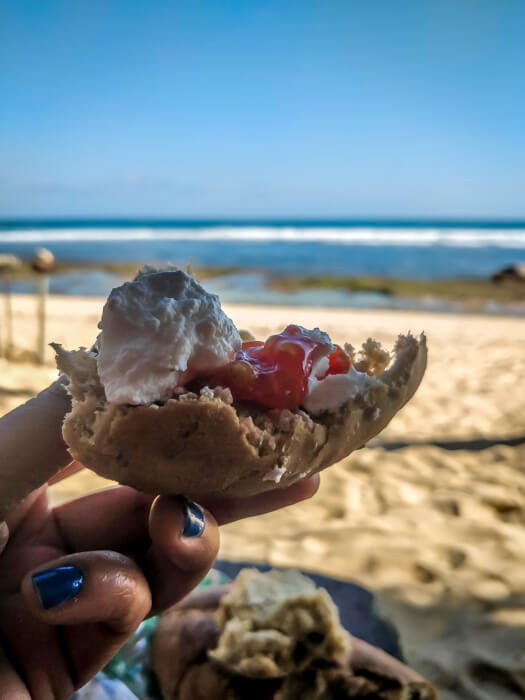 Do you also love a deserted beach? What do you think is the best place to visit in Bali? 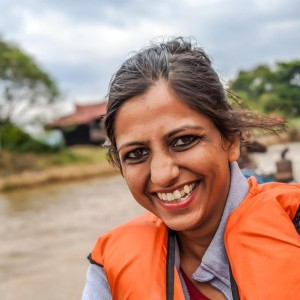 A playful day on the deserted, turquoise Nyang Nyang beach - one of the best places to visit in Bali - with tips to reach the beach and memory postcards.
This site uses cookies. By continuing to use this website, you agree to their use.
To understand more, including how to control cookies, please read ourCookie Policy. Accept and Close Reject
Privacy & Cookies Policy