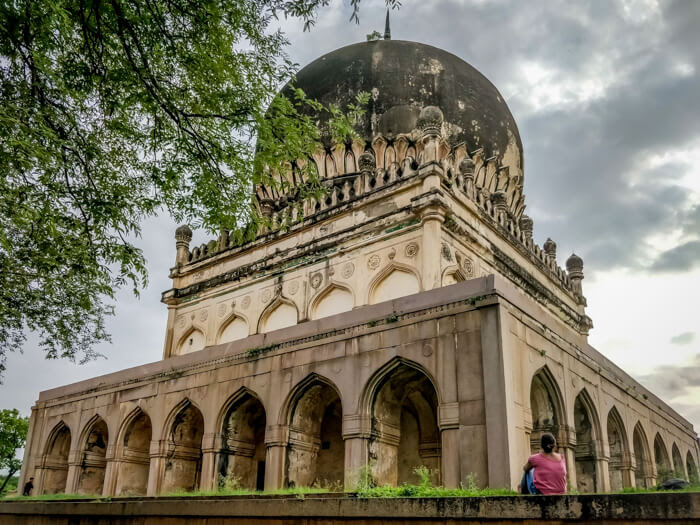 When I traveled to Hyderabad twice in the summer of 2018 for my US visa interviews, I decided against writing a Hyderabad travel guide. Not because Hyderabad didn’t have enough archaic domes, stone-carved mosques, vast lawns around centuries-old tombs, pigeons clouding the grey sky, flaky flavorful pastries crowding old bakeries, robust fort walls that sprawled through the city, ginger tea being sold at every nook and corner, and historic buildings standing bright and beautiful as proud queens amongst the hustle and bustle of the old bazaar.

But I didn’t want to write this list of places to visit in Hyderabad in 3 days because Hyderabad city seemed orthodox to my independent taste. Men ogled women freely, while their wives roamed around the city fully clad. Hoards of men crowded the corner shops and the streets while the women were nowhere to be seen. I even saw an old Muslim man pointing out to me and then later telling his son that the style of clothes I was wearing (a pink top and three-fourth jeans) weren’t decent. Though delicacies sent out a spicy fragrance in every corner of this Nawabi town, we had a hard time finding delicious vegetarian food in Hyderabad.

Then I decided against my intuition of not writing about Hyderabad.

As I returned from my Hyderabad city tour, I slowly realized that Hyderabad was so much more than the conservative society rallying the streets of this heritage city.

Hyderabad was established by Muhammad Quli Qutb Shah in 1591 at the banks of the Musi River to overcome the water shortages at Golconda fort. Later Hyderabad became the major trade center for pearls and diamonds as the mines of Golconda were rich with both. The lineage of the ten Qutb Shahi rulers then shifted their capital to Hyderabad, but the city was won by the Mughals to be eventually lost to the British.

The present-day Hyderabad can be divided into the historic city that is on the southern side of the Musi River, and the New City that sits on the northern banks.

Though most of the historical places in Hyderabad are in the old city, this division is hardly visible.

Now Hyderabad bustles like an era from the past that is equipped with modern cars and tall glass skyscrapers. While on one side you will see bright Charminar standing tall reminding us of Hyderabad’s Nizami heritage, on the other side you will see cabs full of white-collared migrants rushing to Hitec city. Laad Bazaar is as popular as Mega Shopping Mall. While Golconda fort is a weekend’s delight for many, the GVK Inox isn’t much behind. KFC might have a long queue of burger-hungry customers, but Shah Ghouse Cafe is even busier.

Hyderabad is an interesting blend of traditional and modern that invites you to immerse in it even if that means elbowing your way through crowded streets or standing in line to get into the Golconda fort. These are just the battles you have to win in Hyderabad.

But if we are talking about imperfection, let me tell you that men stalked me even in the artistic lanes of Paris and Delhi, and I wouldn’t even get started on how crowded London tube gets.

So I will get started on these places to see in Hyderabad list.